A Flag of No Nation

“This is a living and essential book.” —sam sax, author of Bury It and Madness

A meditation on world invention and collapse, A Flag of No Nation traces the stories of Turkish Jews in the 20th century, blind colonists in a white ocean, and performers enacting new rituals around a nationless flag. Through forms of storytelling that range from allegory to oral history, Tom Haviv investigates the history of Israel/Palestine and the mythologies of nationalism. A warning against imperfect dreams, and invitation to imagine something new, A Flag of No Nation reminds us how the act of remembrance can help us re-envision the future.

“Tom Haviv’s relentlessly inventive first collection offers a fresh and moving reckoning with the charged nature of his family’s Levantine-Jewish identity. Weaving a hybrid text out of a richly complex tale, Haviv makes his personal story come to stand for a much larger history, one that is, as he shows here — politically and poetically — re-membered best by being broken open.”
—Peter Cole, author of Hymns & Qualms: New and Selected Poems and Translations

“Tom Haviv’s A Flag of No Nation gives image and language to places and peoples that were not only lost and forgotten, but forced to be forgotten, othered, and shamed. The starting point of the writer’s journey asking his grandmother ‘Where are you from?’ is answered throughout the text beautifully and delicately, giving again and again the opportunity to be in that place where the poem comes from, where the image is caught so wonderfully, where this conversation still continues.”
—Tehila Hakimi, author of Company and We’ll Work Tomorrow

“In this remarkable first collection, we are shown history is built from stories. We learn who tells, who’s told, and how it’s told makes all the difference. A Flag of No Nation refigures or recalls the poet as mythmaker, as archivist and historian, as the living pulse that links these things together through the human breath. In these formally inventive and deeply felt poems, Tom Haviv bears witness through inherited narratives, text, and emails. This is a living and essential book.”
—sam sax, author of Bury It and Madness

“Tom Haviv’s ‘A Flag of No Nation’ is a magnificent rendering of family history and migration, as presented through “this cascade of choices / we call our stories.” Dedicated to his grandmother Yvette, Haviv’s meditative and visionary book of poems gathers and disperses the ephemera of the past in a structurally inventive and fluid landscape of text, image, pixels and sound. The reader, set on a voyage at once mythical and digital, is dazzled by Haviv’s explorations of style and the concert of voices that guide the multitudinous sections of this book. The “shore of the song” in Island leads into to the thoughtful translations of recorded correspondence in Losslessness. The self and the pixel converge, and Yvette’s dreamy ontology sings via emails and voice recordings entwined with history. Rectangular Sun and A Flag of No Nation exemplify a work at once of the earth and nonmaterial, as they explore the purposeful imaginations of human communities. ‘A Flag Of No Nation’ recalls and reveres generations in a compassionate timescape that yields, like land appearing on the horizon, something sublime and unknown.” 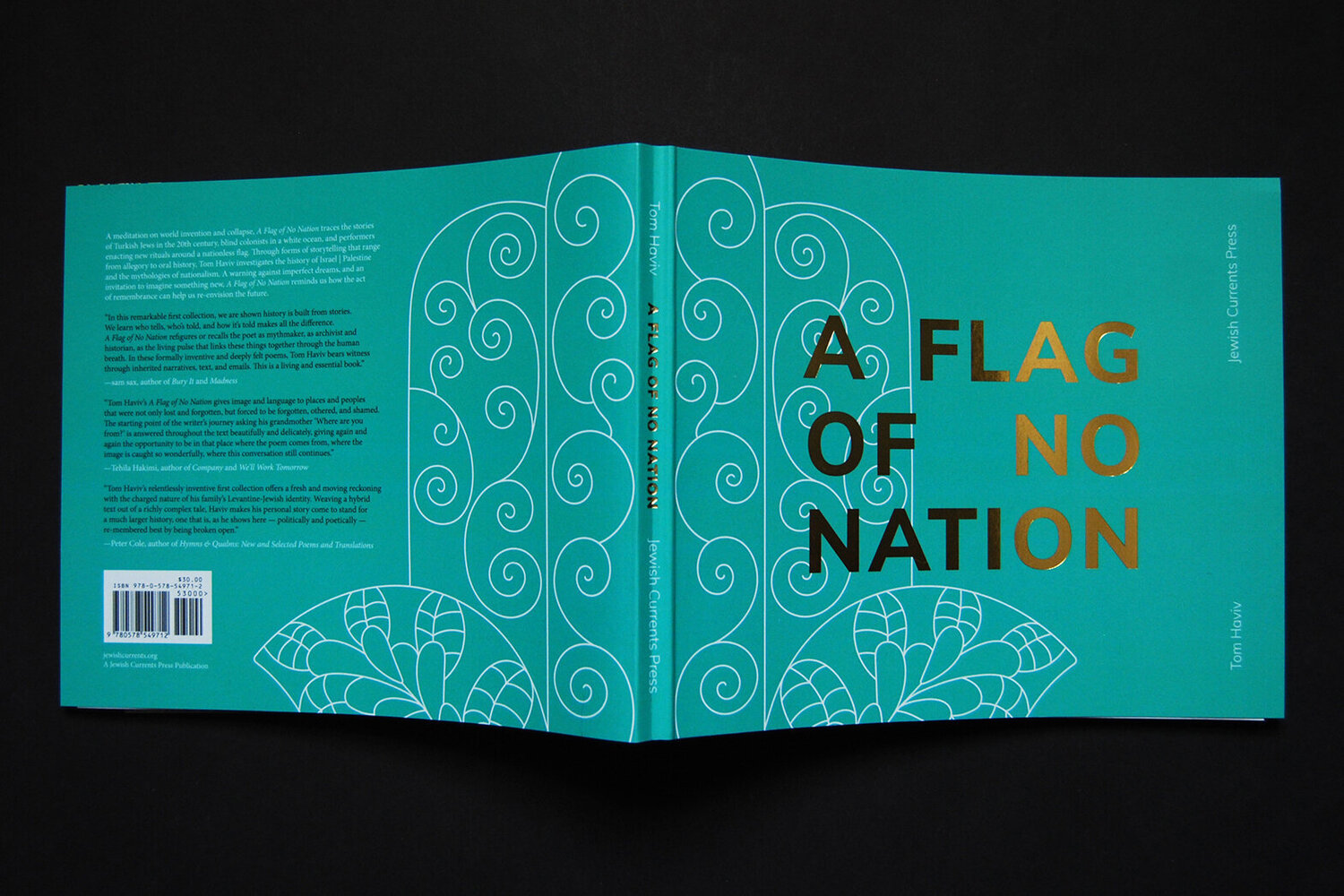